2011 US Open of Mountain Biking 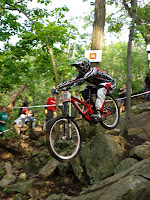 Terralogic Park Industries, the official event promoters of the U.S. Open of Mountain Biking, have announced that athlete and vendor registration is now officially open. Set to take place on May 26th through May 29th, elite mountain bike racers from across the globe will assemble at Diablo Freeride Park to battle for a share in over $50,000 in cash and prizes.

Founded in 2003, the U.S. Open of Mountain Biking was established to reinvigorate interest in American gravity racing at a point in time where neglectful sanctioning bodies and sponsors of yesteryear had stripped the U.S. gravity scene of its identity, its soul and necessary funding. Nine years later, the proven, trendsetting PRO/AM format allows up-and-coming athletes the unique opportunity to test their mettle against the world’s fastest gravity racers. While the professional categories typically take center stage, the U.S. Open has become the premier proving ground for amateur racers, with several past champions using the win to kick-start professional careers.

The athlete field in the Men’s Downhill discipline will be capped at 450 total competitors and pre-registration is highly recommended to secure a qualifying position and guarantee your participation in America’s premier gravity race.

Video Footage from our Weekend at the 2009 US Open

Get Outside and Enjoy the Ride

Posted in Events, Race | No Comments »

As a member of Rideyourbike.us You will have access to our members forum, Photos and videos of the places you want to ride at, Calendar of events and the ability to post your own rides. Registration is free so click here to join today